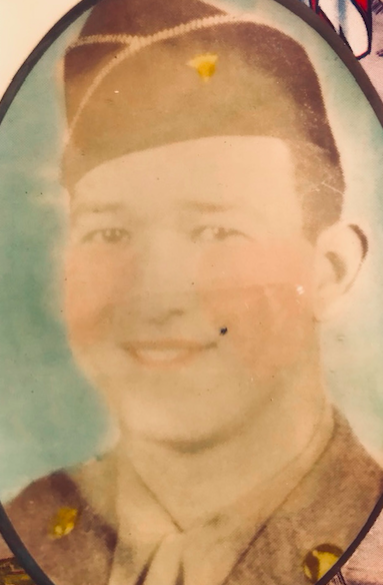 “Only one man has a right to boast and that’s the man that never does” (Evan Esar). My grandfather Manuel F. Reyes is one of those men. His story, his legacy is one I never heard him tell. In fact, he never spoke of it. It is a story of bravery, love, and complete composure.

On July 6, 1944 in an Italian hillside near Castellina, the World War II Red Bull Squadron moved to attack German forces. Manuel, just 21 years old, served the squadron as an aid man, which today would be called a medic. During the campaign, he was the last soldier to abandon the fire swept forward slope, remaining to treat wounded men. One of those men was his Captain. Under intense enemy small arms fire, he carried the Captain from the open position where they were, to a place of safety. Later, Manuel voluntarily left a covered position again and exposed himself to heavy machine gun and rifle fire to go and dress the wounds of his fellow comrades. In the midst of that action, an enemy bullet ripped through his shoulder, causing a painful wound. Disregarding the pain, Manuel completed the treatment of his fellow comrades and helped them get to cover before he would allow his own wound to be dressed. His courageous conduct and coolness under fire was highly meritorious. For his bravery and service, he was awarded a Purple Heart and Silver Star. Unbelievably, that was only one of two Silver Stars awarded to him.

Manuel joined the Army in 1941, just after the attack on Pearl Harbor. At that time, the focus was on raising and training a vast military force, and the training camps prepared him through rigorous physical conditioning as well as physical and tactical combat training. The soldiers went through 126 hours of training for rifle marksmanship, but only 10 hours of what they called battle courses, which consisted of some mental conditioning. It was not until many years later that the army trained soldiers how to protect their minds, and not just their bodies.

So how did my grandpa Reyes keep his composure in the ultimate time of distress with such little impactful preparation? The answer lies in how he prepared himself for those moments. Before going into those battles, he had accepted that he was going to see horrible things because he had already envisioned the horrors of war in his mind. He was mentally ready, so when the time came, he kept the composure to do his job—save lives.

My grandpa Reyes is an example to me and to us all. While we may never be called to enter any combat situation, we can still face any fear or adversity in our own lives with courage and composure. The way we build that ability is to dip into what difficulties we have already experienced and accept that there will be more to come. We must learn to accept difficulty as part of the very fabric of our lives. While we don’t always know what specific difficulties will come our way, we do each have a good idea of the general types and sources of pressure we could face on a daily basis. Being able to anticipate challenges helps us when they inevitably come. We can tell ourselves that we will not be surprised by what comes our way and despite the difficulty, we will keep our composure as we get through it.

Apply the following suggestions to develop the kind of composure that will help you in pressure-filled situations:

Take deep breaths. Most people breathe shallowly, 12 to 20 times per minute. Box breathing, Tactical Breathing, and Coherent Breathing slow breathing down to five to seven breaths per minute. This practical strategy can change the response of the body’s autonomic nervous system, which controls unconscious processes such as heart rate and digestion as well as the body’s stress response.

Clear and Calm Your Mind

You can only think clearly and objectively with a calm and composed mind. Once the mind is calm, answers appear. Paths to action appear. In some cases, the answer is to do nothing and let it go. In a pressure situation, your thoughts may begin to swirl to create “worst case scenarios” in various “stages” played out in your mind’s eye. This type of thinking feeds anxious emotions. The source of the anxiety can be fabricated inside the mind and cause further stress or other tangible consequences. To calm the circus of racing thoughts, focus on one statement or mantra to center your mind such as: “Things are not being done TO me, they are just happening.”

Condition Your Mind in Advance of a Crisis

The middle of a crisis is not the time to solve the problem. When your brain can imagine something happening in vivid detail, it can become part of your “experience files.” It will be as if you have already experienced the event, so if and when an event actually happens, your brain will initiate a memory of what you already saw and how you planned to handle it. This is a way to internally fortify yourself for potential difficulties.

What are your “battles”? What challenges will or do you face? We often experience the same problems or conflicts more than once and can even anticipate what challenges we might face. Like my grandpa Reyes, taking the time to prepare your mind for crises will lead to the best possible outcome.